Join me on my good friend Mary Hughes' blog for a tip on adding 'flesh' to a scene. All scenes grow from a plot point or intention, but the difference between a sketch and a full-bodied scene is what I call "layering." Hope over to Mary Hughes 3T Writing Tidbit to discover how this is done.

Also, the Rafflecopter continues through Jan. 23, up to 6 entries allowed per person, so don't miss your chance to win 35 first books in a series.
Posted by Helen at 7:18 AM No comments:

Want to discover new series? Visit Northern Lights Book Heaven January 13-17 and enter their rafflecopter for a chance to win 35 e-books, each the first in a series. One lucky winner will take it all: https://www.rafflecopter.com/rafl/display/92db775046

THE PRINCE OF VAL-FEYRIDGE, book #1 in the Crown of Tolem series, will be featured Wednesday, Jan. 15. I hope you'll stop by and give it some rafflecopter love.
Posted by Helen at 10:08 AM No comments:

Join Me in Visiting These Authors' Blogs This Week

Discover new authors by visiting these generous authors of The Wild Rose Press who have invited me to their blogs this week. Here's the schedule:

Jan. 8, I'll round out the week with a stop at Mary Morgan's blog for another interview: https://www.marymorganauthor.com/post/spotlight-new-release-interview-lord-of-druemarwin-by-helen-c-johannes


By the way, LORD OF DRUEMARWIN is available on Netgalley until mid-January: https://www.netgalley.com/catalog/?text=lord+of+druemarwin
Posted by Helen at 12:44 PM No comments:

Welcoming 2020 with a Giveaway

For a chance to win a Kindle copy of my new release LORD OF DRUEMARWIN,

head over to Long and Short Reviews Winter Blogfest on Friday, January 3. I'll be sharing a favorite family holiday recipe and inviting comments. To enter, simply comment on the post. I'll be drawing the winner by the end of the day January 4. Here's the link: https://wp.me/p2ZcT9-n0k
Remember, it doesn't go active until January 3. Good luck and hope to hear from you!
Posted by Helen at 12:35 PM No comments:

It's a party the rest of the week. 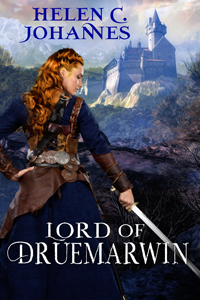 Celebrate with me today, Dec. 18, at Tena Stetler's blog: https://www.tenastetler.com/interview-helen-c-johannes-author-of-lord-of-druemarwin/

Join me on Friday, Dec. 20, at Jana Richard's blog: https://janarichards.blogspot.com/2019/12/new-release-from-fantasy-romance-author.html


LORD OF DRUEMARWIN - PAGES FROM THE HEART Winner in Fantasy Romance

Tag line: In a world of lies and betrayal, can they trust each other?

Blurb:
Lady Raell can fight, ride, and argue politics as well as her brothers. Only being mistress of her father's household keeps her in skirts. In Naed, the new Lord of Druemarwin, she has found devotion, a kindred spirit, and a marriage promise. But when a forgotten and unwanted betrothal comes to light, she has no choice but to run.
Amidst sweeping revolution, Naed must rally his people, fend off assassination attempts, and fight against claims he's a traitor. Then he discovers everything about his lineage and family is a lie. And his beloved belongs to another.
With lives and a kingdom at stake, Raell and Naed must find a way to protect the innocent and save their love.

Excerpt:
“Raell, now is not the time—”
Aye, it wasn’t. They stood in torchlight on an open parapet while assassins stalked them, but this might be her only chance to reach him across that precipice he’d thrown up between them, to secure the future they were meant to share.
“Does my honor mean naught? When weighed with D’nalian honor, is mine lesser because ‘tis a woman’s honor? Or because ‘tis a Tolemak’s honor? Be honest and tell me that.”
The world had gone silent; Raell could hear nothing over the rush of blood in her ears, the terrible heavy beats of her heart while she waited, dizzy with fear, breathless with longing, for the man she loved to respond with a word, a look, even a blink. Even a shift of his gaze she’d take as a sign he’d at least heard, mayhap begun to consider—
“Yes, be honest, Lord Naed,” said a voice she’d heard but once, a voice that raised all the fine hairs on her body and made her innards contract into a cold, tight knot. “Tell us both how much honor means to a bastard who’s betrayed his countrymen and his blood.”

My publisher The Wild Rose Press has collected recipes for all kinds of holiday meals and treats from its authors and compiled it into a fantastic FREE cookbook. 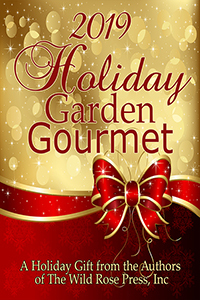 For a free PDF download, email me at helen.c.johannes@gmail.com and I'll send it on to you. Be sure to check out my recipe for Beef Noodle Bake, a quick and easy holiday meal. Enjoy!
Posted by Helen at 10:00 AM No comments:

Last year we flew to Philadelphia to visit family. It was our first visit to the City of Brotherly Love, and we just happened to choose their coldest Thanksgiving ever. Being from northern climes, we knew how to dress for our typical get-around-town-in-the-car routine. But that didn’t prepare us for the ‘big city’ and having to walk 10-30 min. everywhere because parking is next to impossible. Brr.

We enjoyed the obligatory Philly Cheesesteak, visited the Liberty Bell, saw Ben Franklin’s grave, toured the fascinating Philadelphia Mint (amazing how they make coins), and learned how to use the commuter trains. Having visited London and ridden the Tube, this was pretty familiar territory. So was the basic drab, utilitarian nature of most stations and cars.

After a fantastic Thanksgiving dinner (which I didn’t have to make—yay!), we decided to spend Black Friday not shopping but seeing the Christmas offerings downtown. So we trudged 10 min. through the coldest morning of our stay, boarded the drab commuter train, and rode to see the Christmas Village, the Comcast show, and the Macy’s Dickens Village, stopping for supper at Reading Market. Exhausted by our full day out in the cold and wind, we trudged once more to the train station where we encountered…Thanksgiving Magic. 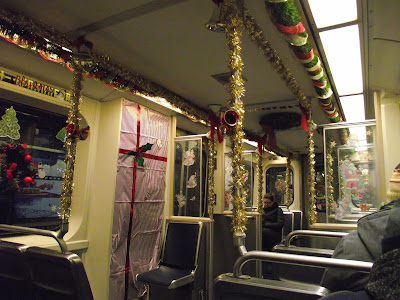 The drab, utilitarian train we’d ridden earlier that day had been transformed into a gift-wrapped wonder. We rode home in thankfulness for those who’d performed this magic.

Happy Holidays to everyone!

(This post was originally posted at The Wild Rose Press Blog on Nov. 23.)
Posted by Helen at 12:12 PM No comments: 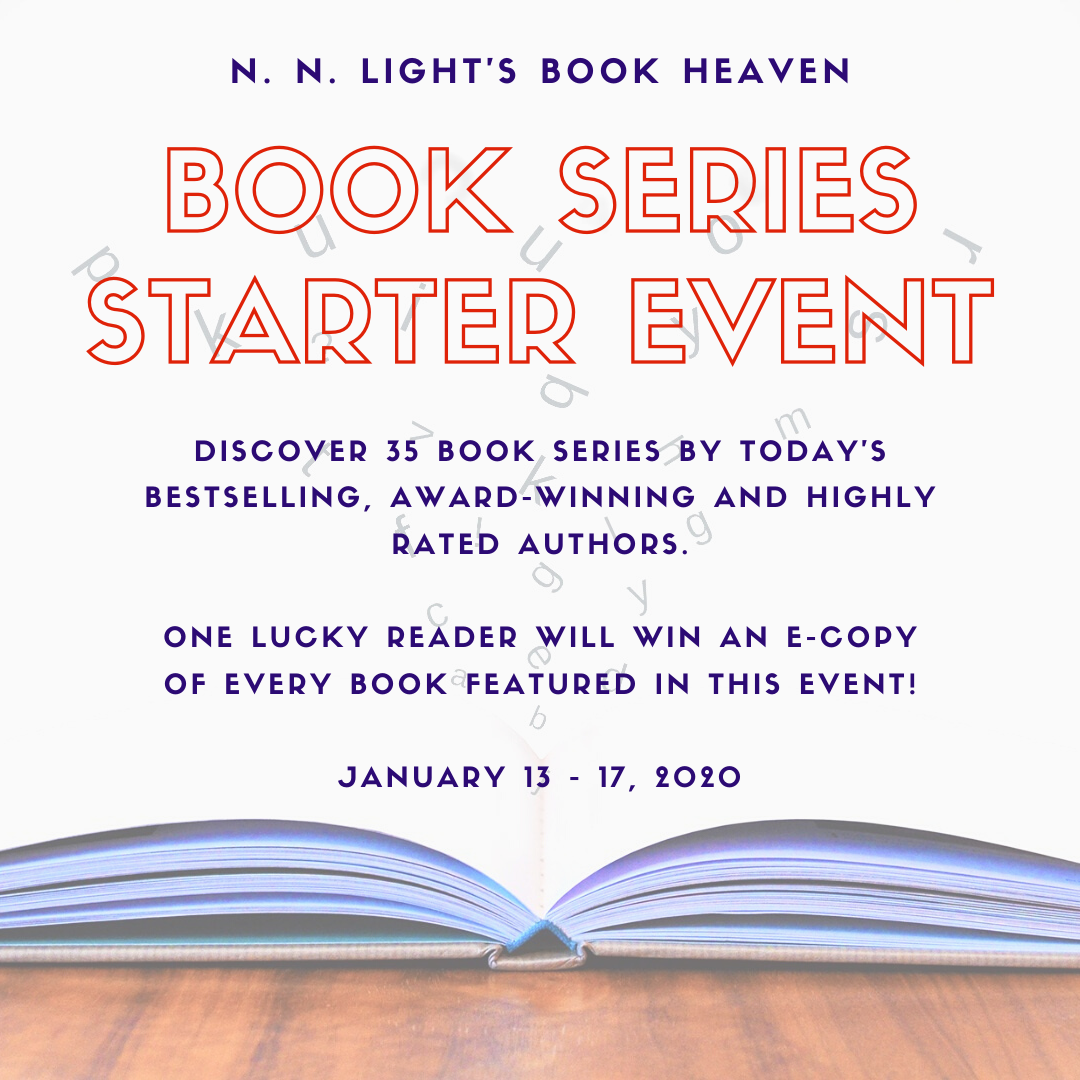 Join me Wed., Jan. 15, for a peek at THE PRINCE OF VAL-FEYRIDGE, #1 in the Crown of Tolem series and a chance to win books!

EPIC Award for Prince of Val-Feyridge 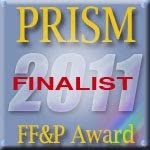 Pages from the Heart Finalist 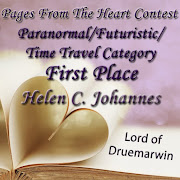 The Lord of Druemarwin - Fantasy Romance

Links to Check Out 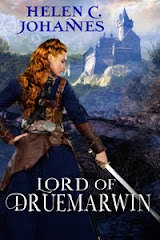 Available Dec. 18; In a world of lies and betrayal, can they trust each other? 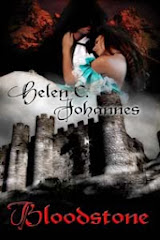 Beauty and the Beast, a timeless romantic fantasy retold in BLOODSTONE, a 2011 Launching a Star Winner in Fantasy Romance. Now in wide e-book distribution. 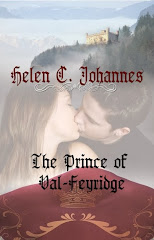 A warrior with a destiny, a woman with a gift. Can loving the enemy restore a broken kingdom, or will forbidden love destroy it--and them--first?

Confessions of a Fantasy Romance Writer

The story behind the book THE PRINCE OF VAL-FEYRIDGE

Helen
Growing up, Helen C. Johannes read fairy tales, Tolkien, The Scarlet Pimpernel, Agatha Christie, Shakespeare, and Ayn Rand, an unusual mix that undoubtedly explains why the themes, characters, and locales in her writing play out in tales of love and adventure. A member of Romance Writers of America, she credits the friends she has made and the critiques she’s received from her chapter members for encouraging her to achieve her dream of publication.